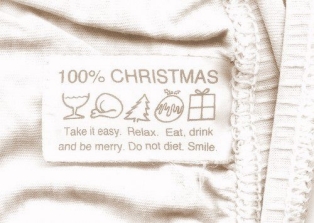 Well, it’s finally here – winter break!  Ever since going to college I was never the type to miss home.  Don’t get me wrong, I love my family, some home cooking and a nicer couch/TV than my college possessions; but I’ve always been independent, trying to figure out my life, and working during some days off of class to get extra money.  This year was different.  There is an entire three weeks between the end of fall semester and the beginning of spring semester (longer for me since my finals were almost nonexistent).  While I would usually opt to work as much I as could around the holidays, this year I worked this past week and just arrived home yesterday, with two weeks off!  After going back and forth of not wanting a smaller paycheck, I figured this is the last time, for awhile, in my life when I can pick and say when I want to work.  Next year I’ll be in an entry-level position with presumably little say in taking days off and after that building up my credibility to earn that awesome paid, personal time.

I cannot wait to see my extended family on Christmas Eve and travel with my parents and brother to California for New Year’s and the 100th Rose Bowl game in Pasadena/SoCal, but on those other days there is going to be the inevitable family drama or boredom at home.  Thankfully, I’m so busy during the school year that I have a big list of things I want to do!

1. Catch up on Reading: I literally have my back issues of Glamour, Cosmopolitan and Marie Claire dating back to August, seemingly unread.  Return on Influence by Mark Schaefer and Never Eat Alone by Keith Ferrazzi are both books I started and haven’t finished.  I also need to read Lean In by Sheryl Sandberg (I’m behind, I know).  Lastly, I have a Pretty Little Liars book to catch up on – I started the series in high school so while it’s a little below me now, I still always need to know what happens!

2. Catch up on TV: Time to finish the first season of Orange is the New Black that I never finished, watch a couple seasons of Mad Men and finally get into Scandal.  My lack of TV watching is already made fun of and I’m going to renew that Netfilx account!

3. Craft: My Pinterest boards have been very neglected lately.  I really want to make some homemade candles.  Now that I’m typing I realize I also need to catch up on my year of photos and make a book at MyPublisher.  So much to do, so little time.

4. I would end at three, but I know myself and I can’t go without some type of structured ‘work’ for two weeks.  Here enters the job search.  Just less than five months from graduation I’ve already been researching every public relations firm in New York City and will be focusing on my strategy to get hired!

What do you do for fun during the holidays?