The city that never sleeps is an understatement.  Experiencing true New York City nightlife means you will probably be going home when the sun is rising, at least a few times.  There is also a stereotypically high chance that majority of guys out are investment bankers and fashion girls will be sipping a vodka cranberry, which they didn’t pay for.  If you’re lucky you’ll be popping champagne delivered with sparklers and dancing on the bar in the best city in the world.

These are a few (well it actually turned into a decent list) of my favorite places I went, though everyone knows there’s hundreds more I didn’t include.

Nothing short of extravagant, Lavo Nightclub is sure to be full of its fair share of international bachelors and house music

My personal favorite club, Marquee is the place to be on Wednesdays.  A large space with swanky couches, flashy lights and a good mix of private tables and dance floor you can also overlook the excitement disco-ball level from the second-level balcony.  Hosted by famous DJs, a memorable night out I danced to Afrojack’s set.

Literally what looks like a hole-in-the wall during the day is one of the city’s classiest places to party.  If you can handle it, start your week off with a Monday night at Avenue, one of its most popular nights.  A frequent hot spot for celebrity sightings and great DJs you’ll be sure to be smiling the next morning at work, no matter how tired you are.  Conveniently located next to Artichoke Pizza (see below).

If you want everyone to know where you were and probably wake up with evidence, head to Riff Raff’s.  There’s no way you won’t have a good time, when being marked with their signature tribal paint on your face. 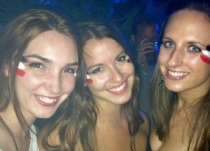 If it’s already Thursday and you still don’t want a clubbing break for the bars, take the elevator to the top for panoramic views of the Meatpacking district at Catch.

With two locations on both Park Ave. and Meatpacking, the rooftops of the Gansevoort hotels offer you the best views of Manhattan.

If you’re looking for a chill, fun spot to hang with friends check out the biergarden at The Standard hotel.  Packed with tables, a photo booth and a few ping pong tables, it’s perfect for summer.

Part of the South Street Seaport, Beekman’s is the ultimate place for after-work drinks with it’s lounge couches and laid-back atmosphere.  Stay until dark for a gorgeous view of the Brooklyn Bridge and its lights reflecting on the water.

Just another bar in Lower East Side, Hair of the Dog is the place to go if you want to dance and drink beer.  Overall good time and good crowd.

If you’re interning or just a graduate missing college dive bars, head to Turtle Bay.  Packed with a young crowd, $1 beer Wednesdays and pong tables in back be prepared for a wild night.

Let’s just say that S & I planned to come here for an early drink before meeting up with friends, and never left.  With signature fishbowls in 3 flavors and a diverse crowd I wish I would’ve gone here more all summer.

Located on Pier 66, The Frying Pan is a huge hangout right on the Hudson River.  Fun with friends, coworkers and even a casual date.

I only went here once, but with a prime location in East Village, The Penny Farthing is a decent bar stop during your night out.

While this was never my favorite bar, I thought I’d include it because it’s still an alright place to grab a drink if you don’t have anything else to do – and the line is long for a full house every night.

This small, Lower East Side bar is a pretty good time as its namesake.  Presuming there aren’t too many creepy dudes, the back dance room is a good time.  The bouncers will mark your arm with a “NO FUN” stamp, which is ironic to see a few hours later, after having FUN.  Be sure to talk to the owner as well, an awesome guy from Ireland.

Not a bar, but rather a sushi restaurant with unlimited sushi and sake bombs.  Yes, I did just say unlimited.  Look forward to making friends with neighboring tables as everyone will be doing the same deal you are for a rowdy 2 hours. Cash only.

A must-include on my list as it’s one of the bars for Michigan State watch parties. Spartans in a crowd are a guaranteed good time, and New York is a good time, so put the two together and it’s the best.

I can’t sing whatsoever, but going to Sing Sing with friends is a great time and you’ll definitely have hilarious videos to watch the next few days.

So their happy hour before 8pm is BOGO drinks and after 8pm is half-off bottles of wine.  Need I say more?

Not actually a bar, this Mexican restaurant needs to be included on the list because of its cheap, strong margaritas. Frozen, on the rocks or as a bulldog, you’ll be overwhelmed by the choices and having a great time with friends here…not to mention the sauce on their chicken tacos is to die for.

Where I need to go still

Just a few places I meant to make it to, and haven’t yet.  Comment with your own suggestions, as the city has endless places to explore!

Transportation of choice for going out: UBER!  Download the app to hail a car to pick you up wherever, and be charged later.  Or better yet, find someone else who uses Uber to catch a ride so you can be rolling up to your next spot in a sylish black Escalade with tinted windows, an attractive driver and music blasting.

And the best food for your late-night cravings:

The best $5 you will ever spend for a huge slice of thick, delicious pizza.  You must try the famous artichoke pizza.  It’s so good, don’t be surprised if you find yourself in a cab to one of their 3 locations, even if you weren’t anywhere nearby earlier in the evening.  Late-night employees are always funny, and following @ArtichokePizza on Instagram will have you craving a piece of their pie every day.

The best hot dog you will ever eat. Ignore people’s comments about how “gross” hot dogs are, and go taste what the King makes.   Dozens of specialty franks as well as amazing fries and smoothies.  My order of choice: “Pig in da Blanket” (hot dog with bacon, cheese and onion) and curly fries with cheese and jalapenos.

Though I didn’t actually order food here, it’s the famous spot from “When Harry Met Sally” and has tons of tables and photos of history all over the walls.  Worth stopping by.

If you don’t get a true New York bagel now, guarantees you’ll need it in the morning when you stroll outside to get an iced coffee from Dunkin’ Donuts.